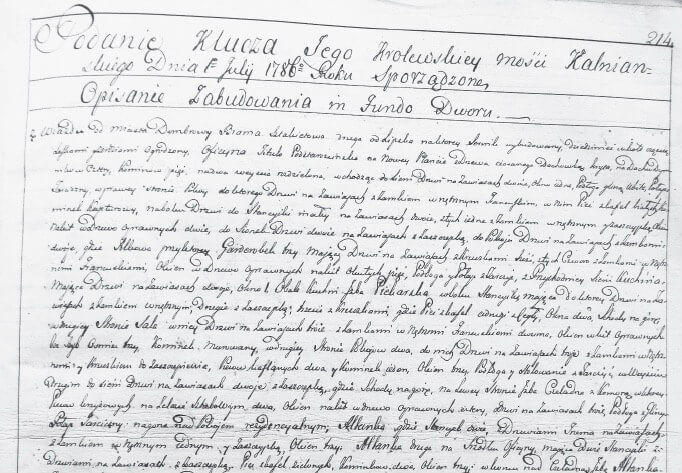 The estate inventories first and foremost purpose is taxation and enumerating the duties and obligations of the serfs who labored on the estates themselves or in villages owned by the same landowner. While finances are the raison d’être of such documents, they are not devoid, as you will see, of genealogically relevant information. 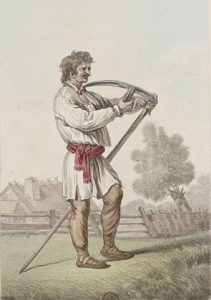 While the face of serfdom, called pańszczyzna in Poland, changed over the centuries, there were several constants. Our ancestors were bound to the soil and subject to the rules and requirements set forth by the landowner. While laws were promulgated over the centuries regulating certain policies and practices and the relationship between serf and lord, it remained a hard existence exacting a physical and monetary toll upon the peasantry.

Peasants were required to perform free labor for the estate and forced to give a portion of what they raised or produced to the manor (danina in Polish) in the form of eggs, cheese, chickens, mushrooms or anything the landowner required.

Peasants were also forced to do maintenance on roads, bridges and estate buildings and assist in estate plantings and harvests several times a year. In addition to forced labor, some also had to pay rent, taxes, as well as for their own farm implements and tools such as scythes, hammers, plows, and carts. This left the farmer with little disposable income.

The estate inventories also described in minute detail all of the buildings, tools, stored grains, furniture, animals and just about anything found on the estate, down to the last potato in the root cellar!

The records are handwritten texts and charts, mostly all in Polish with certain phrases in Latin. They are divided by “ekonomia,”a person who was the overseer of all matters relating to taxation and finances of the estates in the district. Each ekonomia was subdivided into smaller units call “klucz” which, in modern Polish, means key but used in the context of these records it can be rendered as “a complex of manors and estates possessing their own governing body.”

The names of the klucz units were frequently the same as the largest town or village in the district but not always. At times, they were named after an estate within the district that was not the official name of any village in the district (think Tara from Gone with the Wind). The names of the villages listed could be exactly the same as they are today. In other cases, they are similar to the modern designation but not an exact match (e.g. Miedziejewszczyzna was used in the 1700s but today the village is called Miedzianowo). In other cases, village names will appear that no longer exist but their approximate location can be surmised by finding the other nearby villages in the district that still do exist.

Consulting the series Nazwy Miejscowe Polski by Kazimierz Rymut, a compilation of Polish place names which include any historical variants of the name, may provide information on place names which may no longer be extant. 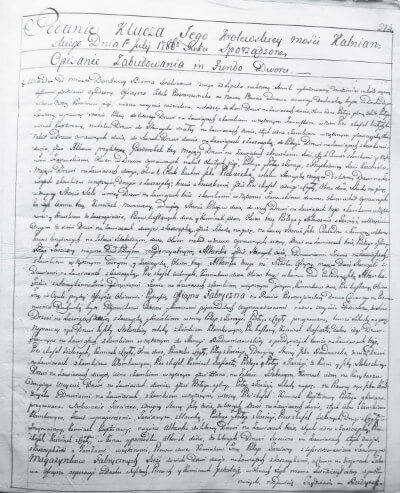 This is a page from a sample estate inventory. The title reads “Podanie Klucza Jego Królewskiej Mości Kalniańskiego Dnia 1 Julii 1786 roku Sporzadzone,” that is, “Report on His Royal HIghness’s Estate of Kalno, drawn up on 1 July 1786.”

The entries for each klucz follow a similar format which is explained below.  The language in the textual portions is archaic and difficult to translate for a variety of reasons.  Simple one word English equivalents of certain items are not possible.  Rather, the term must be explained as many words in the text describe institutions, taxes, monetary units and practices that no longer exist and require amplification.  Practices that were commonplace in the 1700s are unknown to us in the modern world.  They no longer exist and an average native speaker of language will not fully understand such text without additional explanation.

Think of this in reverse —  what would an eighteenth century peasant think when hearing terms such as cell phone, automobile or rocket fuel?  These items were not part of their reality and not readily understood.  So, even if you speak a language well, translating these texts, without appropriate additional study of the context in which they were written, guarantees a rough ride.

This article was originally published in the Summer, 2014 issue of “Pathways & Passages”.
To order a copy of the newsletter and a complete version of this article, visit our Newsletter Archives.