The Słownik Geograficzny, a topographical and geographical multi-volume work on localities found in the Polish Commonwealth and surrounding areas (published between 1880-1902), describes Wola Raniżowska as follows:

Wola Raniżowska is a village in the County of Kolbuszowa, and is located on a sandy plain covered with forests, on the left bank of the Zyzoga River, 236 meters above sea level. The village stretches in a straight line along a main street which extends from a stream (behind which the forest starts) to Lipnica. 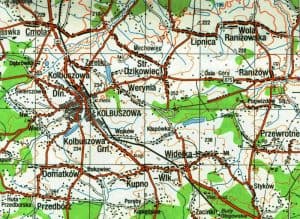 The village is located 3.7 km. to the north of Raniżów, the site of the nearest post office. The village is divided into three sections, one, the eastern portion, has 50 houses and 265 inhabitants; another on the north, has 17 houses and 99 inhabitants. In total, there are 622 houses and 3,368 inhabitants in the whole village. Of these 3,182 are Catholic, 25 are Lutheran and 165 are Jewish. Ethnically there are 185 Germans and 3,182 Poles. There is a small school in the village with two teachers and a lending bank.

The Roman Catholic Church of St. Wojciech in Wola Raniżowska was established in 1919. The village previously belonged to the church in nearby Raniżów. At present the parish has approximately 2,200 parishioners and serves Wola Raniżowska and Stece.

The mother church in Raniżów serves Raniżów and the villages of Poręby Wolskie, Staniszewskie and Zielonka. During partition, the village was in the Administrative District of Kolbuszowa in Austrian-ruled Galicia. It is presently in Podkarpackie Province.