A History of Dąbrowa Białostocka

A History of Dąbrowa Białostocka

At the time of the founding of the parish church of St. Stanislaus in Dąbrowa in the mid 15th century, the surrounding territory was an expansive and sparsely populated forestland. The Polish kings and Lithuanian princes gradually encouraged its development and as such the settlers who arrived to inhabit this vast tract of virgin territory arrived from both the east (White Russia) and the west (Mazovia). The forests were in part leveled and small towns and villages began to form. By the early 17th century, Dąbrowa had evolved into the political and commercial center of the region. By this time the area contained several large estates, villages and forest settlements. A town charter was granted to the town due to the efforts of Antoni Tyzenhaus the Chancellor of Lithuania. The villages in the Dąbrowa area were built along the length of a long straight road which stretched for 20 kilometers from Kamienna in the north to Siekierki in the south. For this reason, the cluster of villages is referred to as “Długa Wieś” (the long village). It is said that the carefully planned positioning of these villages was designed to form a barrier to protect the vast forest lands which still existed at the time. 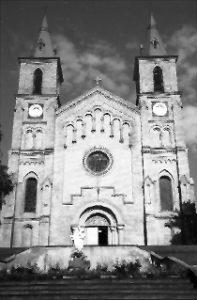 The Dąbrowa area has been traditionally a region where members of many ethno-cultural groups resided. In addition to the Roman Catholic parish church of St. Stanislaus, there was also a synagogue. An Eastern Orthodox parish was located in nearby Jaczno. In the latter part of the twentieth century an orthodox church was established in Dąbrowa itself. The town also has a small Muslim population. Protestant Calvinists are mentioned in manuscript sources as having resided in the town as well. 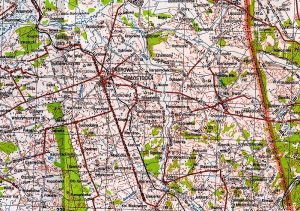 Due to the restoration of the parish at Różanystok in 1918, the establishment of new parishes in 1943 at Grodzisk and in 1980 at Zwierzyniec, the parish is smaller today numbering approximately 8,000 parishioners.
Immediately prior to partition, Dąbrowa was located in the województwo trockie (Province of Troki). The area became part of the Russian partition during the late 1700s. It briefly fell under Prussian jurisdiction (part of Prowincja Nowowschodnia) as the partitioning powers traded and fought over pieces of Polish territory. In 1807 the area became part of Imperial Russia under whose control it remained until the conclusion of the First World War. For most of the time under Russian rule the town was located in the Province of Grodno (Grodzieńska Gubernia), in the County of Sokółka and was known by the name Dąbrowa Grodzieńska until 1945.

In the latter part of the nineteenth century mass emigration out of the area began. Poor economic conditions, a high birth rate, and a lack of industrialization forced many residents to seek a better life in other countries. The bulk of the emigration was directed to the United States with much smaller numbers going to Brazil, Argentina, Cuba, Canada and France. Some Dąbrowa area families migrated eastward as well and settled in the Wołyń region, notably near the city of Łuck. The town suffered extensive damage during the Second World War and its population declined considerably. The bulk of the town’s Jewish population was murdered or sent to Nazi concentration camps by the Germans. Shortly after the war, Dąbrowa counted a mere 535 inhabitants, even less than its population of 737 in 1800. Today Dąbrowa is a small town of approximately 6,000 inhabitants located in the Province of Podlaskie, County of Sokółka.

EMIGRATION TO THE NEW WORLD

The undisputedly largest concentration of persons from Dąbrowa Białostocka outside the borders of Poland is New Britain, Connecticut. Names of persons originating in Dąbrowa begin to appear in the city’s vital records in the early 1890s. In 1892, the first Roman Catholic marriage of a couple, in which at least one of the spouses was from the parish at Dąbrowa, was recorded when Stanisław Abramowicz wed Zuzanna Mościcka from Kamienna. In 1893, the second Dąbrowa couple was married when Wincenty Kułak of Malyszowka and Ewa Ławrynowicz of Ostrowie were joined in matrimony. An analysis of the geographical origins of persons getting married at the city’s then only Polish parish (Sacred Heart, numbering 10,000 parishioners by1920) indicated clearly that over one third of the marriages prior to1925 involved at least one spouse who traced origins to the parish at Dąbrowa Białostocka. Many of the immigrants of the Eastern Orthodox faith who established Holy Trinity Russian Orthodox parish in New Britain also traced their roots to the villages surrounding Dąbrowa, most notably the villages of Ostrowie, Grzebienie, Szuszalewo and Kropiwno.

One can only speculate why the first settlers chose New Britain as their home in the new world. New Britain was a bustling industrial city, the world’s largest producer of hardware at the time whose factories were in constant need of labor. Undoubtedly these first settlers came to the city seeking employment opportunities. Aside from the abundance of jobs, another factor no doubt heavily influenced the prospective Dąbrowa immigrant to choose New Britain. That factor was the Rt. Rev. Lucjan Bojnowski.

The arrival of Msgr. Bojnowski in the city in 1895 exerted a strong influence on the migration patterns of Dąbrowa area immigrants. Bojnowski, whose pastorate was to last until the time of his death in 1960, was a native of Świerzbutowo. His presence, coupled with New Britain’s healthy economy, made New Britain a popular, attractive and thus likely point of settlement for the farmers leaving the villages surrounding Dąbrowa.

Smaller concentrations of people from Dąbrowa can be found in other localities in the US. Providence, Rhode Island had a notable colony of Dąbrowsczcznie as well as Middletown and Bridgeport in Connecticut. Smaller groups of immigrants from the parish are also to be found in Worcester, Hatfield and South Deerfield, Massachusetts and in the coal mining towns near Scranton and Wilkes Barre, Pennsylvania, especially in Pittston and Kingston. In the Midwest, Grand Rapids Michigan is perhaps the largest concentration of Dąbrowa area immigrants. Some chose the coal mining areas of southeastern Ohio, as well as the City of Steubenville as their home. There was also a small colony of Dąbrowa families in Paterson, New Jersey. Others from Dąbrowa disappeared into large cities such as New York, Chicago, Philadelphia and Detroit. However, in none of these localities was the presence of Dąbrowa immigrants as pronounced as in New Britain.

Recent immigrants from the parish continue to come to New Britain, although in smaller numbers, well over one hundred years after the initial settlers arrived.