About the European Immigrant Birthplace Records 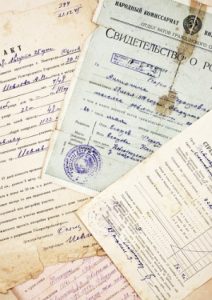 For some, one of the most challenging aspects of research is finding the exact birthplace of an ancestor in Europe.

The individuals enumerated in the database had some connection to the community with which they are listed. The person was married or died in that community or resided in the listed community, even for a brief time, before moving elsewhere.

The majority of geographical information provides a village or parish of birth. In a few cases, there is only a county, province, partition or country. This is because the document from which the information was taken lacked more exact information. For example, a marriage license may have listed the husband’s village of birth but for the wife the information was left blank or merely had “Poland” or “Galicia” recorded.

A small number of the individuals in the database were not immigrants but spouses of immigrants born in the United States or Canada.

The database spans the first half of the 20th century for the most part and concentrates on the wave of immigrants who settled here between 1895 and 1920 although there are scattered entries for later and earlier settlers.

There may be multiple entries for the same name. In most cases, these are different individuals who shared the same first and last name. However, if an individual had more than one spouse, that person may appear twice. What appears here on line is but a mere fraction of the materials we hope to post eventually. Most of the material we have is taken from selected localities in the states of Connecticut, Delaware, Ohio, New Jersey, Missouri and Rhode Island. Even if you think you had no family in any of these states, check the database anyway. You never know where your relatives may have been migrating before they settled down permanently. Perhaps their lives touched a locality in one of these states and you are unaware of this.

The names of females in the database may be married or maiden surnames. Some of the womens’ surnames contain the Polish feminine grammatical endings (-ska or -cka) so be sure to search under both versions (i.e. Korzeniecki and Korzeniecka).

The database is, of course, not complete. It is virtually impossible to document EVERY immigrant in a given community. If you do not find a person listed that you think should be included, it is because we have no geographical information on that person at this time. We will add such person(s) if you provide some documentary evidence of the persons birthplace and their connection to the listed community.

Some of the names are spelled incorrectly. They may have been anglicized or contain common errors made by record keepers. Some names are dialect versions of surnames. Check all possibilities!

This is an ongoing project thus check back frequently for new additions. The information is free to PGSCTNE members. For non-members a three dollar fee per name applies (payment by check only).