About the Detroit Records 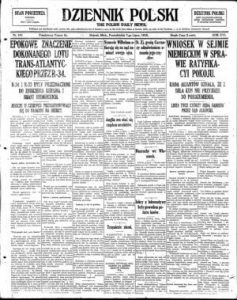 Because families migrated throughout America looking for work, we often find branches of our extended family in regions far from our place of birth. Many of our society members have links to Detroit, the site of a significant and numerically substantial Polish-American population. For this reason, we have created several databases to assist researchers in finding missing branches of their family trees.

The names in the databases of birth, death, marriage and divorce were taken from various printed sources we have at our disposal, including newspapers, parish bulletins and parish histories. THE DATA COLLECTIONS ARE NOT COMPLETE. They represent only what was able to be taken from these secondary printed sources.

The Polish language newspaper which served the Detroit area, Dziennik Polski, was very inconsistent in its provision of birth, death and marriage information. In some years, there were only occasional paid death notices. In other years, there were frequent marriage announcements but no death and birth notices. For some years, notably 1912 and 1923, several months of the newspaper are missing – and  there is no birth information for 1928 or 1929. These lists should not in any way be considered comprehensive. They do, however, mirror what the newspaper carried for a given year.

The birth notices at times gave the name of the child.

However, many list the name of the mother or father, not the baby.

The names in the death index include lists of deaths published in the newspaper or parish bulletin and may or may not be the actual date of death.

Most records list the date the announcement of the issue of the marriage license appeared and is usually not the date of marriage – but provides a close approximation of when the marriage took place.

Divorce announcements provide the names of both spouses plus the date.