About the Anniversary Book Records 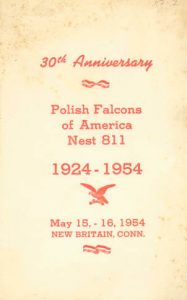 Publications of this type are filled with the names of the persons who played active roles in the history of the parish/club as well as the names of persons who contributed to the publication of the booklet.  Numerous advertisements from Polish businesses and other Polish organizations also appear with frequency, which provide an economic portrait of the community.

Our database contains the names of persons mentioned in these booklets.  Multiple page numbers in the same publication indicates that the person’s name was repeated on different pages.

The letter codes accompanying the page numbers are:

If you find an ancestor or relative in the database and wish a copy of the page on which their name appears, please send $1.00 per name citing the exact page number and parish/organization as well as the year of publication.  A self-addressed stamped envelope of the appropriate size must accompany your request.

Please note that the exact same name may appear twice with the exact same page number.  This could mean that there were two individuals with identical names or the original contained duplicate entries.

Anyone wishing to volunteer to index a parish or organizational history for this database is asked to contact the society.  Please check with us before beginning any indexing.  Avoid duplication.  We have done many more indexes but they have not as yet been posted on this website.

If you have any parish or organizational histories, please consider donating them to our collection which numbers in excess of 500 items Uprzejmie dziękujemy!