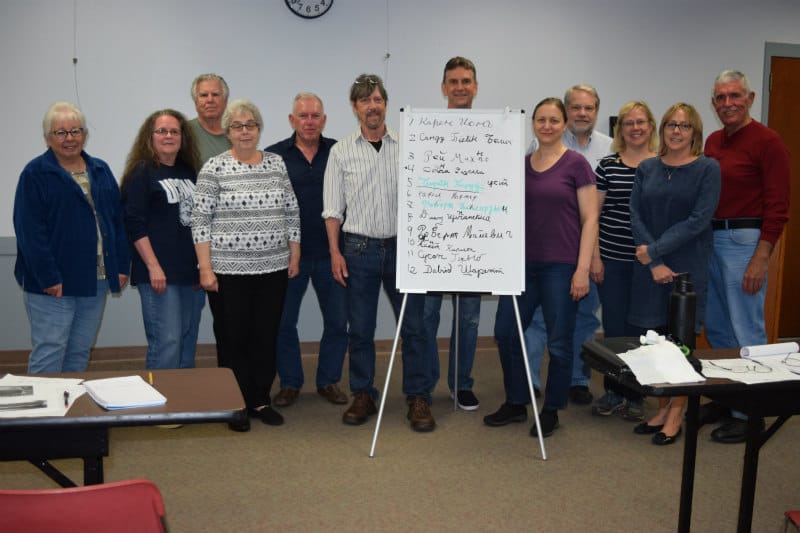 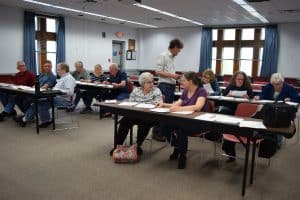 The class was taught by Professor Jonathan Shea, President of the Polish Genealogical Society of Connecticut and the Northeast. The class was limited to 12 so that everyone would get personalized and individual attention.

The workshop began with an overview of the Cyrillic alphabet where participants learned the phonetic sound of each letter as well as how to write them in cursive.

Participants were then given a chance to quickly put their new knowledge to practice by working together in small groups to translate several well-known city names written in Cyrillic. The class enjoyed the fun competition to see which group could “crack the code” of the mysterious Cyrillic symbols first to uncover their meaning.

Next, each participant attempted to write their own full names in Cyrillic. Some were more successful than others, but with the help of their fellow students (and some minor corrections from Professor Shea), everyone completed the task.

The final exercise was to identify and translate the names of a child and their parents from an actual birth record written in Cyrillic. This was an excellent “real world” example of what to expect when participants have to conduct research on their own.

In the end everybody in the class agreed that it was a challenging, but rewarding experience!

Who would have thought that Cyrillic could be so much fun?

The workshop will be held again on June 19, 2019 from 5:45-7:45 p.m. at the same location.  There is no charge for this activity.  Pre-registration is required. To register please email Diane Szepanski at Szepanski3@cox.net